The Challenge to Reach the International League

At the beginning of a dream, a journey starts with a Globe-Trotter suitcase – Special interview with U23 Portimonense S.C. player Toki Hirosawa.

At the National High School Football Championship 2020, football player Toki Hirosawa, stood out immediately. He scored the first goal in the final and was one of the key players who brought the second victory to Yamanashi Gakuin High School for the first time in 11 years, despite the match reaching a penalty shootout. He is not a player who has been attracting attention since the tournament started, nor is he a football elite.

We asked why he chose to depart Japan and take an opportunity to start his football career abroad, along with Globe-Trotter – his luggage of choice.

Congratulations on winning the National High School Football Championship 2020. How did you feel when you received an offer from Portimonense S.C. in Portugal after the tournament?

I had decided to go to Yamanashi Gakuin University after the tournament, but a week later, I received an offer from Portimonense S.C. When I heard the news, my mind went blank. I would have been surprised by an offer from a club from the J-league (the Japan Professional Football League), but it was an offer from an overseas club. My father often said "you never know who is watching and when, so don't lose focus". This statement left a huge impression on me. Winning the championship with a goal was a key moment and a turning point in my life. If we had placed second, I wouldn't be where I am now.

After traveling to Portugal and spending a season there, how did you feel about the differences between international football compared to the J-League and how did you respond to the environment?

The Japanese mentality is: ‘Be part of a team and protect your team’. Both discipline and co-operation are required, but overseas, it is the complete opposite. It’s more important to assert and promote yourself – you must assist or score if you’re going to keep your place in the team for the next game. When I went to Spain in elementary school, I learnt that if you played well, you’d be praised, and if you played badly, you’d be scolded.

I like the dribble-heavy approach in Portuguese football – it suits my style. But it frustrates me that I can't speak Portuguese well. I have an interpreter on the team, but I want to learn more and communicate directly with my teammates during practice so that I can respond to the environment better. I also have trouble eating. The lunch provided at the club isn’t quite to my taste (laughs). Whenever I come back home, I think how delicious Japanese food is and I remember how great Japan is. 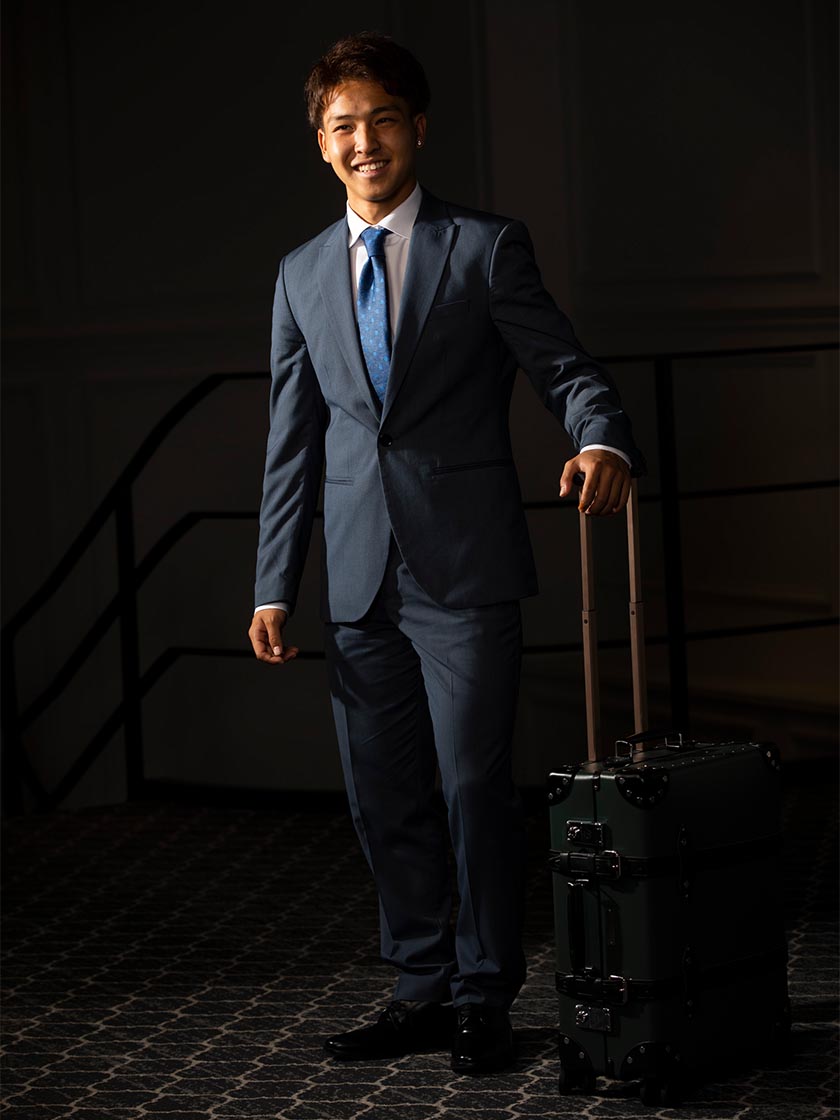 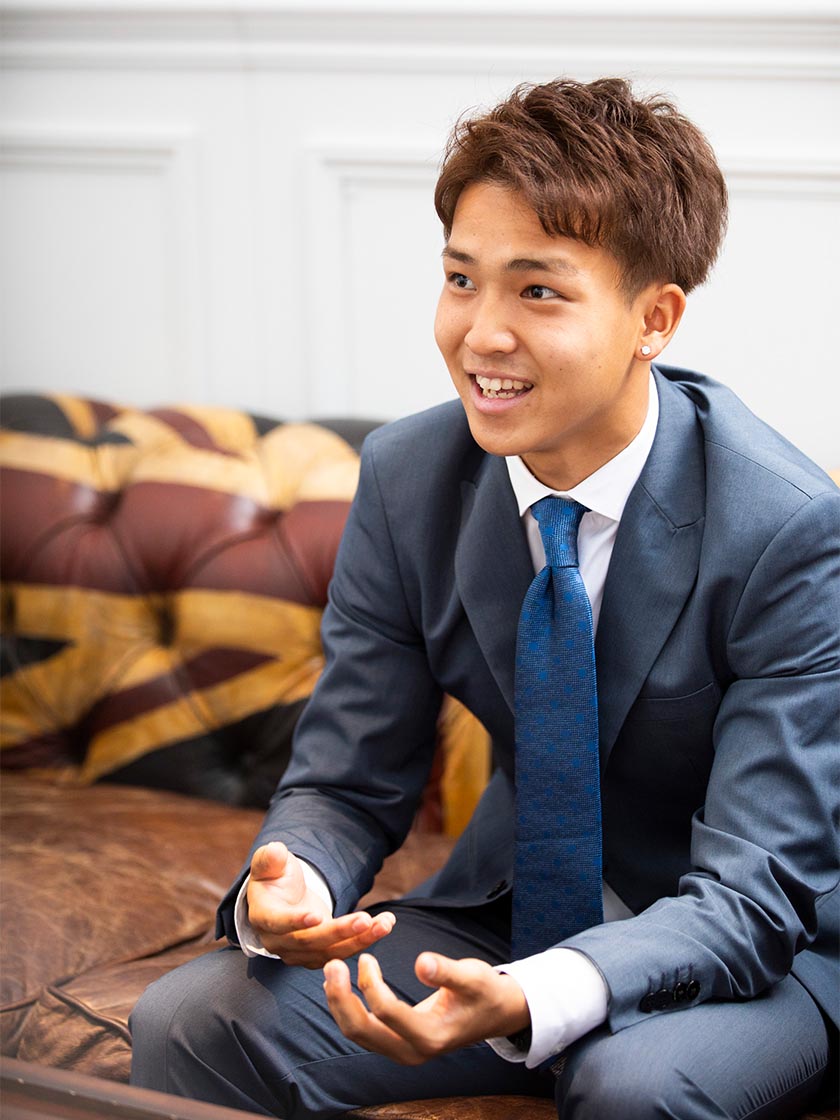 As was the case with the National High School Football Tournament Final, is there any secret in getting the best results on the big stage?

Practice. I'm proud that I'm practicing more than anyone else. I started playing football in tandem with karate when I was in elementary school, but I wasn't good at it at first. I was frustrated because everyone else was much better than me.

When I was in the third grade of junior high school, my father told me to choose my future dream, and I chose football without hesitation. When I entered high school, my father took the decision to move from Kanagawa prefecture to Yamanashi prefecture so that I could concentrate on football and created a training environment. This meant that after the club activities had finished, I could practice at home in the evening.

I am grateful to my parents for creating the perfect environment for me to spend a lot of time playing football. However, I did not get results until the first or second year of high school, and the manager told me that I shouldn’t bother with the dribbling that I am so good at. As a result, I wasn't selected as a starting player for the squad. At that time, I was frustrated with not being able to play in the match - I felt insecure and blamed myself for not practicing enough. But I find practice effortless. I love football. The more I practice, the more I can prove to myself.

The result came when I was selected as a starting player in my third year of high school, and I think I was able to show off my best performance by scoring the first goal in the final. The joy I felt was fleeting, but it’s a wonderful memory to look back on.

You are the second professional Japanese footballer to start your career overseas. What was the most important thing you took with you when you first went abroad?

My thinking is that, as long as I’ve got myself I’ll be alright, so I didn't really bring anything special with me. I made sure I packed my training clothes, my studs and also some casual clothes. I did bring the futon I've been using since childhood. I don't rely on lucky charms or anything like that. As a player who practices more than everyone else, it gives me a lot of confidence in myself, so that’s the only necessity I like to bring with me rather than belongings.

What is your impression of Globe-Trotter and why would you select it as your travel companion?

My criteria for choosing things are commonplace, but one condition I insist on is that they are cool. My first impression of the 4-wheel Carry-On suitcase was that it was very cool. The Vulcanised Fibreboard material will weather well and the more you use it the better it gets, so I think I’ll enjoy seeing it age during my trips. Also, the handle has a nice grip to it. I hate to weigh my suitcase, but this is light, and you can pack a lot in, so it’s an attractive piece of luggage. Additionally, the historical background is wonderful, so I’ll have to strive to be a first-class football player to match the luggage! In the future, I’d like to play in Spain, which has been my dream since I was a kid. To make this happen, I’ll need to build a good track record with my current team. I’ll continue to practice with my luggage beside me.

Hirosawa, who scored a dramatic goal during the final tournament whilst unmarked, became the second Japanese player to start their professional career overseas. He practices more than anyone else, which became the crux of his unrivalled playing style. The 18-year-old continues to evolve as a player. After his stint aboard, we hope to see him return as the star of the Japanese national team, with his Globe-Trotter luggage in tow.

Born in 2002, Toki Hirosawa started playing football when he was in elementary school, and after playing at Shonan Bellmare U15 Odawara, he joined Yamanashi Gakuin High School. He became a starting player when he was in the third year of high school, and in the 2020 finals of the National High School Football Championship, he scored the first goal, and received a lot of attention from football officials. His dribbling caught the eye of Portimonense S.C. in Portugal, where he is currently situated, and where started his professional career abroad. He is expected to be a dribbler who will lead the Japanese national team into the future.

Launched as a limited travel case in partnership with the Japan Football Association (JFA). Full carbon fibre is used for the body to create a robust exterior. The design comes with an eye-catching emblem of the Japan national football team engraved on the surface. The lining comes in a beautiful and pure blue shade inspired by the "winning colour" of "SAMURAI BLUE". The handle has an adjustable telescopic handle at two levels, making it a functional trolley with 4 wheels.

The U-24 Japan national team case that uses Vulcanised Fibreboard - the patented and recognisable material used by Globe-Trotter. Available as a 4-wheeled case. The navy body, has a subtle design of the Japan national football team emblem in the centre of the body.

The Journey to Victory

All-Occasion Luxury Gifts for Him & Her