Designer Marek Reichman has been involved with some of the world’s most famous cars, including the Rolls-Royce Phantom, the Lincoln MKX and Navicross concept cars and the Range Rover MK lll. He joined Aston Martin in 2005 as director of design and has strengthened the company’s iconic styling – with the form of the new V12 Vantage S, Vanquish Volante, Rapide S, and the DB11.

Aston Martin has a long association with the James Bond films, stretching back to the modified DB5 first used in 1964’s Goldfinger, which has gone on to become arguably the most famous car in the world. The new Bond film, No Time To Die, features a number of Astons, including the iconic DB5.

What’s your first memory of Bond?

I have a brother who is seven years older and he had the Corgi toy of the DB5. I wasn't allowed to go near it because as a younger brother my idea of a Corgi toy was smashing it into a wall or playing rally cars. Then, I remember one evening as a nine or 10 year old, Goldfinger had just started on TV and my dad told me to go to bed. And then the music started and I looked at him and asked if I could watch it. He said I was a bit young but all right. So that was the first time I watched Goldfinger.

What makes the DB5 so special, beyond its association with Bond?

It is a beautiful piece of form. It is a formalist's car. It has unbelievable surfaces and it has beauty inherently in its proportion. Just as an object, irrespective of whether it is a car or not, just something to look and stare at, it is beautiful. Through its association with Bond it has become recognised and it is probably now one of the most recognised objects in the world. It is like the Mona Lisa in that regard. It is also inherently Aston Martin because it is one of the most exceptional executions of our grille. The grille gives the car authority, confidence and presence. It has such character and such a stance because of it and becomes almost human-like.

"...I developed the DBS, which became Daniel Craig's car in Casino Royale. And I think DBS, at the time, changed the perception of Aston Martin."

Are there any moments from the Bond series which have proved special for you on a personal level?

When I came into the company I developed the DBS, which became Daniel Craig's car in Casino Royale. And I think DBS, at the time, changed the perception of Aston Martin. It was a more aggressive, more assertive and more powerful-looking car. We were known for beautiful feline cars and all of a sudden DBS made us performance-orientated again with power. So there was a brand new Bond in an incredible movie with the DBS. And I thought Casino Royale was one of the best movies for me throughout the whole of the Bond franchise. So having the DBS in that film was very special for me.

Our Valkyrie and Valhalla VIP customer cases use a carbon fibre Globe-Trotter case. It looks a little bit like James Bond's attaché case but when you open it up it has an embedded iPad with all the information about the car and some selected material. So, if a customer really wanted to see their Valkryie or Valhalla in a special Alcantara, for example, we would do the imagery and the VIP assistant would arrive with the case and on the iPad would be the images and in the case would be your selected material.

"...I only open the doors of the design studio to royalty and to James Bond."

Tell us about Aston Martin's involvement in No Time To Die…

First of all, I have to say that it is a brilliant partnership. The filmmakers come and visit the studio and we put on a show of everything that we are doing; the things that are about to come out in three or four years’ time, sketches, things that are non-automotive, whether it's a drone, a motorbike, a submersible – all of those things. I only open the doors of the design studio to royalty and to James Bond. A few movies back, Sam Mendes (in Spectre) introduced the DB10 as one of the characters, and with No Time To Die it was very much the same. You understand straightaway that the cars would be used to define certain stages of this Bond's life. The DB5 features in the city of Matera. Why was that such an exciting location?

I am not sure of the exact age but it is probably over 2,000 years old. It is carved into the rock. It is just incredible. And the light quality on the DB5 when you see it just driving up a hill is one of the most exceptional pieces of cinematography in terms of the lighting of a car. I always define an Aston Martin as a ‘brute in a suit’, so you have this incredibly elegant car that has a couple of machine guns that come out of the front lights and destroy the opposition. I just think it's a brilliantly fitting place for that because Matera is a city that has spent its life protecting itself. 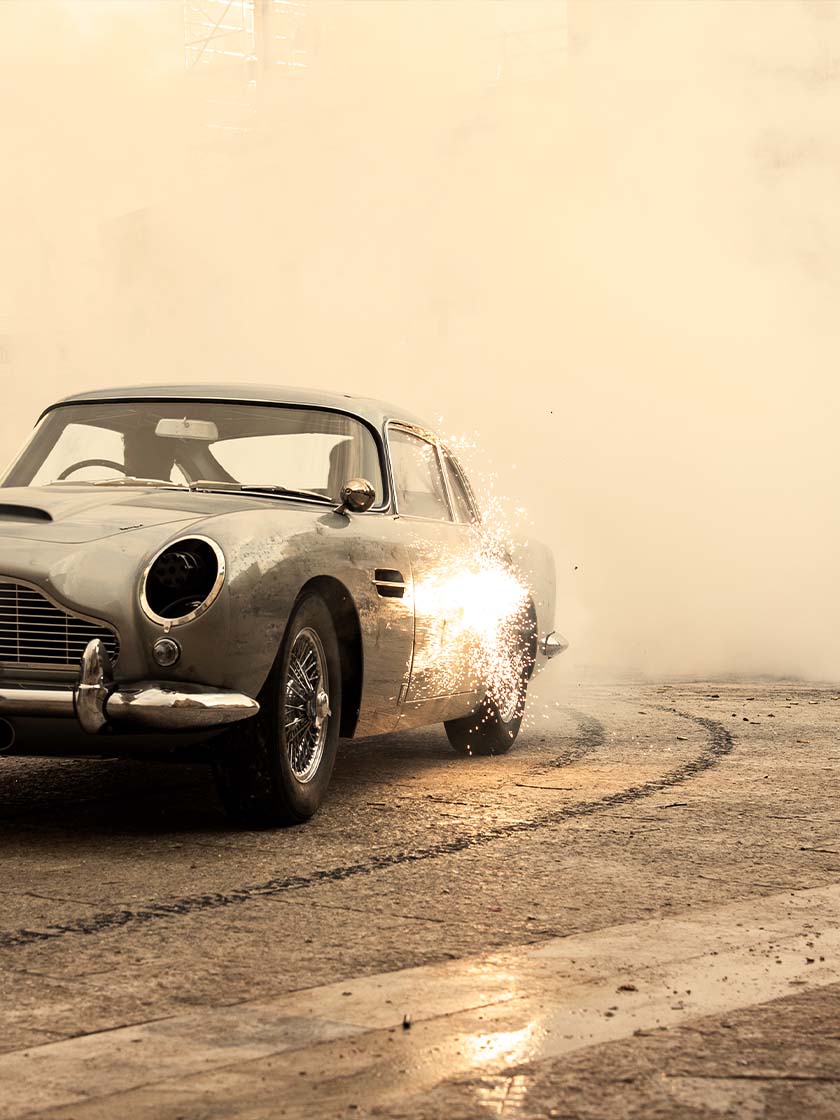 What was one of your first great travel adventures?

I got to do a lot of travelling with my older brother. We went all the way across Turkey. We went to Dalyan, we went up the river, we rented boats, we camped on beaches that you were not meant to camp on and had fires at night and had police boats telling us to get off the beach! I was a 14 year old hanging out with a brother in his early 20s. Then there was an amazing trip to India. I travelled all the way from Mumbai down to Kerala along the coast. Is there a part of the world, or a landscape, to which you often return?

I love the anticipation of seeing the tips of mountains when you are approaching them. So I love driving through the Alps. When you are approaching the Alps, there is something magical about these mountains that are just so impressive in front of you and then you get to drive up them. Whereas, when you are on a coastal road it is kind of flat. So I’d want to head to New Zealand and the South Island and I love Montana and going into Nebraska through the Rockies; they’re just incredible roads.

What’s your favourite type of cuisine?

Cuisine for me is Japanese, especially sushi. The variety of how you can make so many different flavours and sensations from effectively a similar resource, fish. In terms of food, it’s Italy hands down. Wherever you go, whether it is mama and papa owned, whether it is the shop on the corner, a tiny little restaurant, it is always exceptional. I can't split them. If I am on death row I am having sushi as my last meal, but it will be with a pasta starter!

I like to be minimal in terms of packing as much clothing as I can but in as small a suitcase as possible. I do tend to overpack.

With what items do you always travel?

A sketchbook and a beautiful pen. Sometimes I make written notes but a lot of the time I am drawing – whether on the plane, or drawing the shadows that come through the window. And it has to be nice paper in the sketchbook.